This page is under development

Sclerophyll forests form most Australian wooded habitats. Eucalypts, with in excess of 600 species dominate, with often only one or two species producing extensive stands of timber. Melaleucas, Allocasuarinas, Acacias and Banksias are also well represented. Sclerophyll forests are sculptured by fire both naturally occurring and by human management. The seeds of many species cannot germinate unless exposed to bush fires.

In the Wet Tropics sclerophyll forests are open in nature and the boundary between closed rainforest and open wet sclerophyll forest can be dramatic, being a distance of only two or three metres. An excellent example is McDonald's track in the Barron Falls National Park Kuranda, with rainforest on one side of the track and open forest on the other. In this case a change in soil is responsible, however in most cases the boundary is maintained by fire. Pollen studies reveal that the western boundary of rainforest has moved significant distances over thousands of years in response to climate changes. The boundary is a diversity hot spot for birds and reptiles with species favouring each habitat found within a small area.

If an image is black, reverse click and select Show Picture﻿ 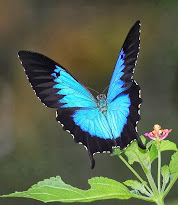